So, I wrote a book, pictured below: 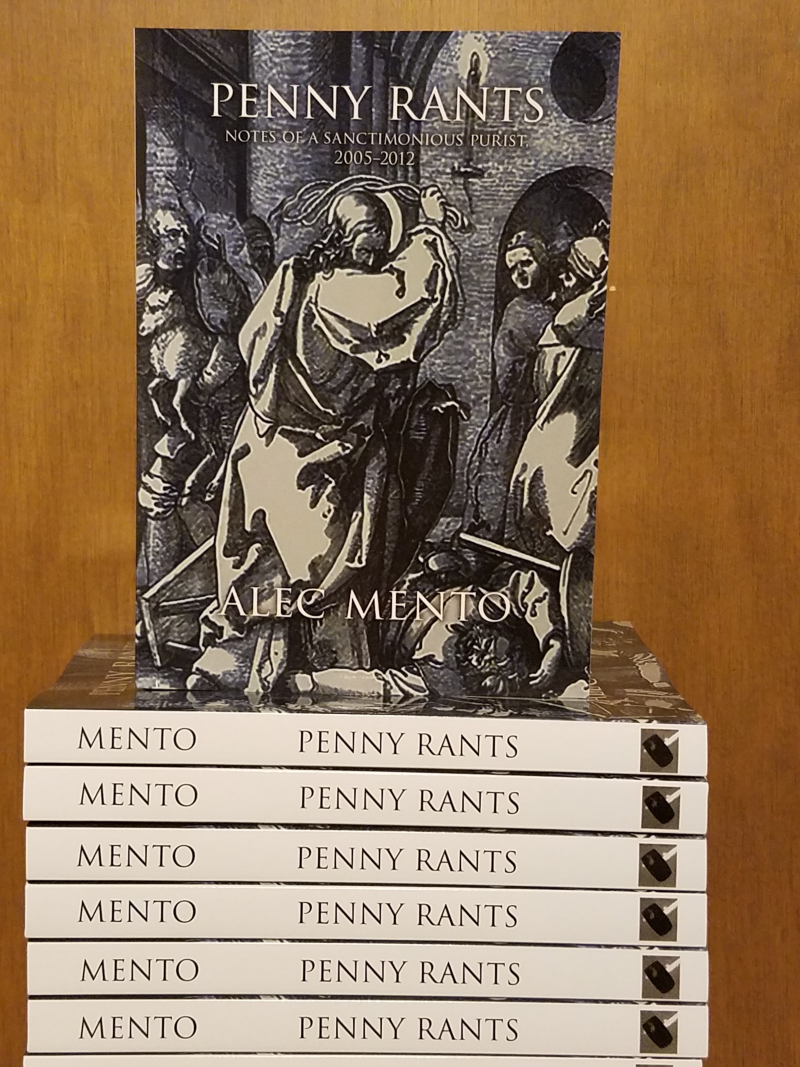 Penny Rants: Notes of a Sanctimonious Purist, 2005-2012 comprises the most representative writing from this humble weblog during the four years of George W. Bush's second term and the four subsequent years of President Obama's first term. When I say "most representative," I mean you'll pretty much get my entire political and social philosophy as I expressed it during those years -- in very small doses, of course, since the basic building block of both Thieves in the Temple and Penny Rants is the single paragraph, so that, just as a typical post at this blog comprises two to six paragraphs, each with their own subject, Penny Rants comprises 232 paragraphs, one to a page. Sort of like this: 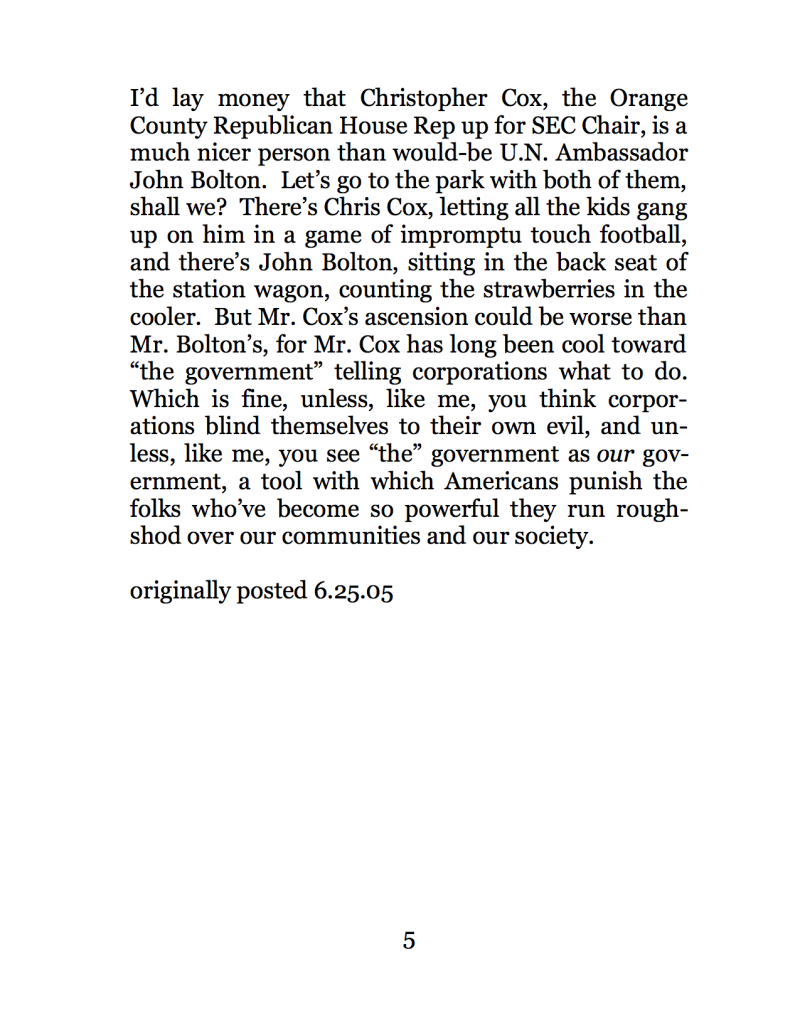 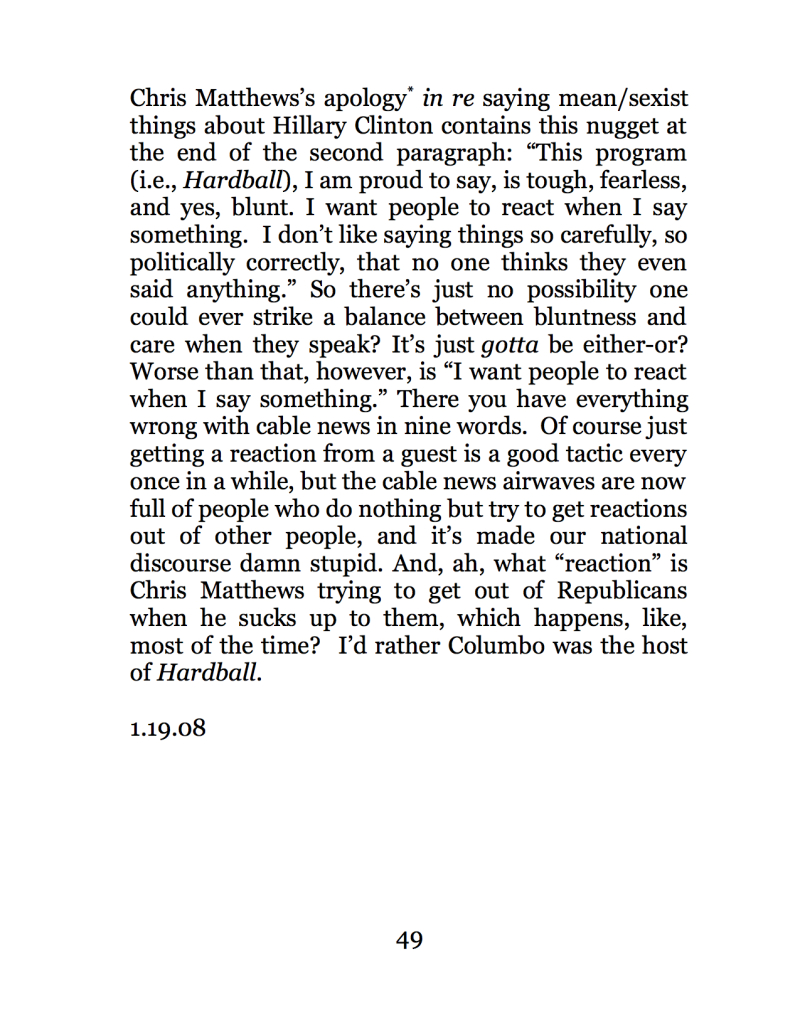 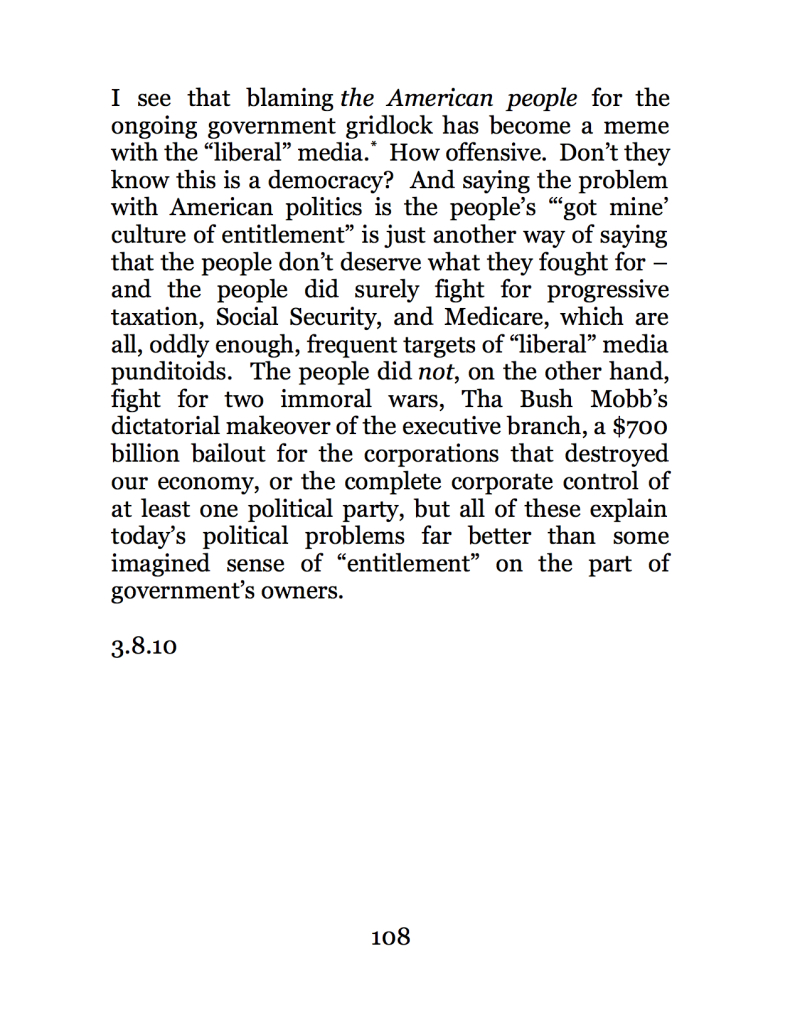 But why "penny rants"? Well, strictly speaking, because pennies are small and because my writings are on the short side. But it's mainly because writing lengthy, angry manifestos doesn't actually make me feel any better -- I'm usually just as angry after a long rant as I was when I started, and if that's the case, then what's the point? Many people find it cathartic to ventilate everything that's bothering them, but I'm not wired that way, and I've found that training myself to say something quickly is immensely satisfying; I'd even go so far as to say that not tabulating every thought that runs through my head has been my way of letting those thoughts go. Of course, saying something quickly has another use. Most people who purport to explain how our politics works seem to have a vested interest in mystifying how our politics works, and if you try to flatten their folly with a volume that could kill an aardvark, you'll take forever writing it and they'll have changed all the rules by the time you do. Better to puncture their folly with something short and sharp; that's what penny rants are, and that's what Penny Rants is.

So, if Penny Rants seems like your cup of tea, you can get it here, at my internet storefront, Blunt Instruments; as I'm able to make it available at other locations, I'll let you know. Price is $10, plus $3 for shipping. If you did me the honor of buying my book, you'd pay for it through PayPal (which you can do even if you don't have an actual PayPal account), so I won't ever see your credit card information; I'll only see your name, address, and your email address (which I won't use for further marketing schemes or sell to third parties). Thanks again, good folks, for all your support, and always remember: one hard-won victory can sustain you through a thousand crushing defeats.